Edit
This article is about the block. For the Minecraft edition, see Bedrock Edition.
Bedrock 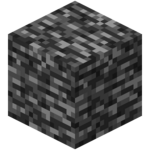 Bedrock is a block that is normally indestructible in Survival.

Bedrock cannot be broken in Survival mode without bug exploiting. In Bedrock Edition, certain glitches can be used to obtain bedrock in Survival.[more information needed] In Java Edition it is impossible to obtain bedrock using normal means,[1] but it can be acquired with some difficulty, using multiple glitches at once.[2]

Bedrock comprises the five bottom-most layers of the Overworld in a rough pattern, although the top four layers are predominantly flat bedrock with only rare gaps, rendering the lowest, completely flat fifth layer (at y=-64)‌[upcoming: JE 1.18] mostly inaccessible. In Java Edition, the patterns of bedrock are consistent in all worlds regardless of world seed (except Superflat).‌[until JE 1.18] In Bedrock Edition, the patterns are dependent on the seed in the Overworld, and if Caves & Cliffs experiments are enabled in a pre-1.17.10 world, bedrock generates between y=0 and y=-64 in pre-existing chunks.

In the Nether, bedrock comprises both the top and bottom four layers in a rough pattern. In both Java and Bedrock Editions, the patterns of bedrock are consistent in the Nether. At the top of the Nether, bedrock prevents the player from ascending above y=127 without exploiting glitches, although in Java Edition the build limit extends to y=255 like the Overworld and the End.

In the End, a single bedrock block generates on top of each obsidian pillar, each topped with an end crystal. The bedrock remains after the destruction of the crystal, and is lit on fire indefinitely. Bedrock additionally comprises part of the exit portal at the center of the central island. In Bedrock Edition, if one manages to break the bedrock in the exit portal, the bedrock reappears when the portal regenerates. Placing an end crystal on bedrock in the end will set it on fire.

Bedrock's primary usage is as a solid unbreakable block to prevent players from falling into the void.

Mobs also do not spawn on bedrock. Endermen are unable to place the block they are holding onto bedrock.

Additionally, when set on fire in the End, the fire on bedrock never extinguishes naturally, similarly to the fire on netherrack.

Since bedrock is indestructible in Survival, it can be used against the wither. Certain configurations of bedrock (Such as that found under the end exit portal) can be cleverly used to securely trap the wither (or even multiple of them) by spawning them below the bedrock. The wither can then either be easily killed, utilized to break blocks automatically, or used to farm wither roses.

Bedrock is one of the two only blocks on which end crystals can be placed, the other being obsidian.

Note Blocks can be placed above Bedrock to produce "bass drum" sounds.

Bedrock is unable to be pushed or pulled by either of the piston variants.

This section is missing information about bedrock's blast resistance being changed from 1,800,000,000 to 3,098,600,000.
Please expand the section to include this information. Further details may exist on the talk page.

Issues relating to "Bedrock" are maintained on the bug tracker. Report issues there.