Edit
watch 28:07
Minecraft Interactive Experience
Do you like this video?
Play Sound
Beacon 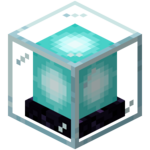 A beacon is a block that projects a light beam skyward and can provide status effects such as Speed, Jump Boost, Haste, Regeneration, Resistance, or Strength to nearby players.

A beacon can be mined successfully with any tool. When destroyed by an explosion, the block always drops as an item.

In order to activate a beacon, the beacon must meet the following requirements:

Pyramids are the structures required to activate beacons. There are four possible pyramid heights. More pyramid levels make more powers available in a wider affected vicinity. The type of mineral block used to build the pyramid is entirely cosmetic and has no functional effect. Several different block types can be mixed without affecting functionality. If the pyramid is damaged so that the beacon deactivates, the previously-set powers resume their effects upon reactivation when the pyramid is repaired. This applies to piston-altered pyramids as well.

Multiple beacons can make use of the same specific mineral blocks below them. Combined pyramids do not need to be symmetrical. The image to the right shows a 6-beacon (2 by 3) pyramid. It requires a total of 244 mineral blocks, with a base layer of 10 by 11.

A vertical beam appears from a beacon if the beacon is activated, extending from the beacon block up to beyond the top of the world.

As the blending algorithm is considerably simpler than that of leather-dyeing, a much larger part of the sRGB space is available. A player may experiment with stacking glass, although programs that calculate combinations are also available.

Beacon beams cannot go through most blocks, but can go through bedrock (to allow beacons to be used in the Nether) and end portal frames.

Once the beacon is emitting a beam, it can then be fed one iron ingot, gold ingot, emerald, diamond, or netherite ingot to select the status effects given to players within range of the beacon. This is done through the beacon's GUI, displayed by pressing use while looking at the beacon block. It doesn't matter which of the items is fed into the beacon.

In the GUI, the player places the item to be fed in the empty slot and clicks an effect from the "Primary Power" section on the left. If the beacon is sitting on a 4-level pyramid, the "Secondary Power" section on the right also becomes active. The player can then choose either to turn on the Regeneration power in addition to the Primary Power or to raise the primary power to Level II. The user clicks the "Done" button (green checkmark), the item is consumed, and the power(s) become activated. To change the beacon's powers, this process must be followed again, consuming another ingot or gem.

If the pyramid is broken, effects deactivate or weaken, or the beacon deactivates entirely depending on the level of the pyramid that is no longer complete. Upon restoration of the pyramid, the originally selected power returns without the need to spend another item.

The five Primary Powers are:

The Secondary Powers available with a 4-level pyramid are:

It is also possible to combine two different primary Level I powers:

Only one of the two powers appear to be selected, although both effects are active.‌[Java Edition only]

Every four seconds, the selected powers are applied with a duration of 9 seconds, plus 2 seconds per pyramid level, to all players in range. Thus, when powers are changed or a player travels outside the area-of-effect, the powers persist for 5–9 seconds, or 13-17 seconds with a full pyramid.

The beacon affects an area in the shape of a square column, which reaches downward and out to each side at a range determined by the size of the pyramid base (see table below), and upward a distance of that range + 384 blocks.

The distance from the player to the beacon block does not affect the intensity of the status effect.

Beacons are block entities, so they cannot be pushed or pulled by pistons or sticky pistons.‌[Java Edition only]

A beacon has a block entity associated with it that holds additional data about the block.

Issues relating to "Beacon" are maintained on the bug tracker. Report issues there.