Edit
watch 28:07
Minecraft Interactive Experience
Do you like this video?
Play Sound
Barrel 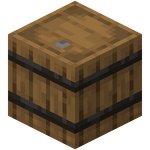 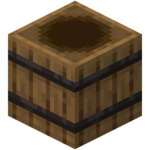 A barrel is a fisherman's job site block, used to store items. It functions like a single chest although it requires no air space above it to be opened.

Barrels can be mined with or without any tool, but axes are the quickest.

Barrels can be moved by pistons,‌[Bedrock Edition only] water and lava flow around barrels without affecting them. Lava can create fire in air blocks next to barrels as if the barrel was flammable, but the barrel does not actually catch fire and can't be burned.

Barrels have a container inventory with 27 slots, which is the same as a single chest. Unlike chests, a barrel can be placed below a solid block and still be able to be opened. They can be filled by droppers and both filled and emptied by hoppers. When broken, barrels drop the contents of the container and the barrel item itself.

By default, the GUI of a barrel is labeled "Barrel". A barrel's GUI label can be changed by naming the barrel in an anvil before placing it or by using the /data command‌[Java Edition only] (for example, to label a chest at (0,64,0) as "Bonus Barrel!", use /data merge block 0 64 0 {CustomName:'"Bonus Barrel!"'}).

If a village has a barrel that has not been claimed by a villager, any villager who does not have a chosen job site block has a chance to change their profession into a fisherman.‌

Barrels can be used as a fuel in furnaces, smelting 1.5 items per block.

Barrels can be placed under note blocks to produce "bass" sound.

Piglins become hostile toward players who open or break barrels.

A barrel has a block entity associated with it that holds additional data about the block.

Issues relating to "Barrel" are maintained on the bug tracker. Report issues there.