Edit
watch 28:07
Minecraft Interactive Experience
Do you like this video?
Play Sound
Not to be confused with Sugar Cane, which was colloquially known as Bamboo.
Bamboo 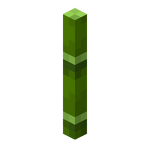 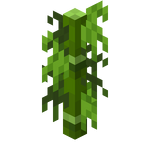 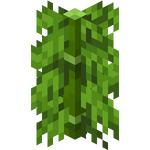 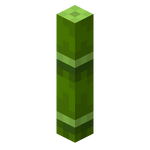 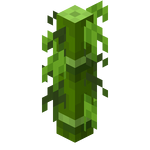 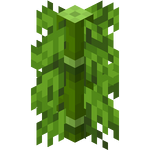 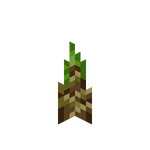 Bamboo is a plant found in jungles, and can be used as fuel for smelting or cooking, to breed pandas, or in crafting scaffolding and sticks. Bamboo is the fastest growing plant in Minecraft.

A bamboo shoot is the non-solid, sapling form of bamboo plant.

Bamboo can be mined with any tool, but a sword breaks the block instantly. Flowing water also breaks bamboo shoots, but not mature bamboo stalks.

Bamboo can be found while fishing in jungle biomes as a junk item.

Bamboo can be planted on moss blocks‌[JE only], grass blocks, dirt, coarse dirt, rooted dirt, gravel, mycelium, podzol, sand, red sand, or mud. At default random tick speed (3), each plant grows on average every 4096 game ticks (204.8 seconds). When bone meal is used on it, it grows by 1–2 blocks. Bamboo can grow up to 12–16 blocks tall. The top of a bamboo plant requires a light level of 9 or above to grow.

Because bamboo breaks in almost the same way as sugar canes, a sugar cane farm can be easily adapted to this use. While water is not needed with such a farm, some spacing is recommended if the harvest is done manually as mature stalks are solid.

Bamboo items are eaten by pandas and can be used to speed up the growth of baby pandas. Bamboo can also be used to breed pandas when at least 8 blocks of bamboo are within 5 blocks of the pandas, making the panda the only animal in the game to have extra breeding requirements. At this point, the player can feed them bamboo and they mate to have a baby.

Bamboo can be used as fuel in furnaces. Each bamboo item smelts 0.25 items. Crafting two bamboo into a stick and using that as fuel is equivalent, smelting 0.5 items.

Bamboo can be placed in a flower pot, where it retains the design it has in its item form.

The appearance of bamboo changes as it grows. When first placed, it takes the form of a small shoot, which has no hitbox. When it grows one block taller it grows to 2 pixels in length and width and the top block has leaves coming off it. At 3 blocks, the top 2 blocks have leaves and at 4 blocks the bamboo expands to 3×3 pixels. At 5 blocks tall, the top 3 blocks have leaves on them. As the bamboo grows, the leaves move up and stay at the top 3 blocks. Destroying a block of bamboo does not change the appearance of the blocks below it. Bamboo is oriented at a random position in the block that it is in. Bamboo, grass, sweet berry bushes, and ferns are the only plants that change their hit boxes as they grow.

The following content is transcluded from Technical blocks/Bamboo Shoot.

This section is missing information about Test metadata variants - is there a "bamboo sapling birch" and such?.
Please expand the section to include this information. Further details may exist on the talk page.

Issues relating to "Bamboo" are maintained on the bug tracker. Report issues there.