Edit
watch 28:07
Minecraft Interactive Experience
Do you like this video?
Play Sound
Not to be confused with Bad Luck.
Bad Omen 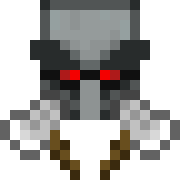 Bad Omen is a status effect that causes a raid to appear when an afflicted player enters a village. This does not apply to any other mob with the effect if the mob is in a village.

In Bedrock Edition, regardless of Bad Omen level, it always has the same effect. It does not trigger raid mobs getting enchanted weapons or an extra wave.

Once the player gets the Bad Omen effect in Bedrock Edition, an animation similar to the one displayed when dying with the totem of undying appears, showing the effect's symbol rotating on the screen.

Bad Omen is a status effect and can be removed through all conventional methods, such as drinking milk or dying.

The player can still receive the bad omen effect in peaceful difficulty via commands (all illager captains despawn in peaceful), but does not trigger a raid if in a village.

Only boss mobs are immune to Bad Omen; however, only players and tamed wolves can trigger raids, other mobs with bad omen while in a village do not trigger a raid.

This page would benefit from the addition of more images.
Please remove this notice once you've added suitable images to the article.
The specific instructions are: old and new particles for bedrock edition