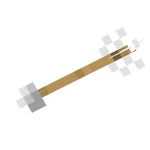 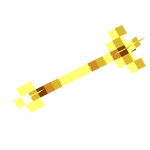 An arrow serves as ammunition for bows, crossbows, and dispensers. Arrows can be modified to imbue status effects on players and mobs.

Arrows shot by players can generally be picked up.

An arrow cannot be picked up if:

This is the case even in Creative mode.[1]

Skeletons and strays may drop between 0 and 2 arrows upon death. The maximum drop is increased by 1 per level of Looting, for a maximum of 0–5 arrows with Looting III.

Strays have a 50% chance of dropping 1 arrow of Slowness when killed by a player. Each level of Looting increases the chance of this drop by 50% of the previous chance. This results in a maximum of 93.75% with Looting III.

In Bedrock Edition, pillagers also drop 0–2 arrows upon death. The maximum drop is increased by 1 per level of Looting, for a maximum of 0-5 arrows with Looting III.

Novice-level fletcher villagers have a 50% chance in Bedrock Edition, or a 2⁄3 chance in Java Edition, to sell 16 arrows for one emerald as part of their trades.

These are all potion effects except Slow Falling in Bedrock Edition and Luck and Bad Luck in Java Edition. Trading is the only legitimate way to obtain arrows of Decay in Survival mode.

Spectral arrows‌[Java Edition only]/normal arrows‌[Bedrock Edition only] can be obtained through bartering with piglins, and have a ~8.71% chance to give the player 6-12 arrows.

In Java Edition, any regular or tipped arrow (except for luck and Bad Luck arrows) can be obtained as a reward item from fletcher villagers when the player has the Hero of the Village status effect.

Arrows stuck in a block that were originally shot by dispensers or by players in Survival without the Infinity enchantment may be collected. Arrows originally shot by skeletons, strays, illusioners, pillagers, piglins, players in Creative, players using the Infinity enchantment, or duplicate arrows created by Crossbows with the Multishot enchantment cannot be collected. Arrows cannot be retrieved when they are stuck in a player or mob, and players or mobs do not drop them when killed. Retrievable arrows have a despawn timer of 60 seconds.

When fired, arrows fly in a ballistic trajectory affected by gravity and drag in air, water, and lava. The arrow's velocity is multiplied by 0.99 every tick, and it also experiences 1 m/s2 of downward acceleration induced by gravity.

An arrow fired in water experiences much more drag than in air: it moves less than 8 blocks before completely losing horizontal speed and falling straight down, although the knockback of the arrow remains unaffected. It also leaves a trail of bubbles in its wake.

An arrow's speed determine the damage it inflicts. The damage inflicted is calculated by multiplying the arrow's damage value with its velocity in blocks per game tick. When fired from a fully-charged unenchanted bow, arrows do 6

of damage, with a smaller chance to damage for up to 11

damage from a medium-charged bow, and 1

from a bow with no charge. Arrows fired from dispensers always do 3

of damage unless their velocity is modified by an external source. Arrows fired from crossbows do 6

Arrows trigger damage immunity on hit. However, unlike other methods of damage that may bypass invulnerability under certain conditions, arrows hitting the mob while it is invulnerable lose all speed and drop to the ground, dealing no damage unless they contact another mob.

Arrows also stick into objects they come in contact with and remain there for one minute before disappearing; the distance from the object and the angle determine how far into the target the arrow penetrates. Such arrows may be retrievable.

If an arrow is stuck in a block, and that block is broken or disappears (e.g., leaves upon decay), then the arrow falls straight down and damages entities below, but never deals a critical hit.

Arrows can bounce off mobs immune to damage like the wither under the "wither armor" effect and a perching ender dragon.

Arrows shot through lava or (if there's at least a 2 block gap) fire catch on fire and show an appropriate animation until they pass through water. Like arrows shot from a bow with the Flame enchantment, they can set other entities they hit on fire for 5 seconds as well as ignite TNT and campfires.

An arrow shot at a boat‌[JE only] or any kind of minecart causes the vehicle to break, dropping any components (including container contents).

Arrows can get visually stuck in players in Java Edition, although not any other mobs. They appear as regular arrows regardless of type.[2]

An arrow can activate a wooden button, wooden pressure plate, a tripwire, or a target. If the arrow sticks in the switch, the switch remains activated until the arrow despawns after one minute. Target blocks emit a redstone pulse for one second, as opposed to the static depressed state of the other switches. Non-wooden switches are not affected by arrows.

When arrows are fired into the sides of blocks, they change their orientation to point more downward than their original flight path might indicate. This can cause them to intersect and thus trigger switches above them that they didn't actually hit, or block rails above them.

Arrows are affected by explosions while they are in flight. Since explosions can increase the speed of an arrow, they can also increase the damage dealt by them. ‌[Java Edition only]

Tipped arrows are arrows that imbue a potion effect when hitting a mob or player. The duration of the effect is 1⁄8 that of the corresponding potion, if applicable, and is not affected by the power of the arrow. The status effect is the same as the regular power effect for the potion. If a bow is enchanted with Infinity, tipped arrows are still consumed.

The types of arrows are:

Arrows of Harming (and arrows of Healing when used against undead mobs) do not add a static amount of damage to the arrow. Instead, the arrow's damage is first calculated, then checked to see if it is below 12

× 6. If the arrow's damage is less than 12, the Harming effect of the arrow makes up the difference, to ensure the arrow does exactly 12

× 6. Therefore, an unenchanted bow cannot deal more than 12 damage using Harming (or Healing) arrows, as it can deal a maximum of 11

× 5.5 damage on level ground. However, if the arrow would deal more than 12 damage, the harming effect is entirely neutralized. This means that bows enchanted with Power I through Power III has a chance to not utilize the arrow at full charge, and any Power level above III never utilizes Arrows of Harming effectively at full charge when against unarmored mobs/players.

In Java Edition, the uncraftable tipped arrow is a tipped arrow with no effect that is unobtainable in regular gameplay. It is available in two variants that don't stack together:

The uncraftable arrow doesn't differ from regular arrows in behavior when used as a projectile.

A spectral arrow confers the Glowing status effect for 10 seconds. The Glowing effect creates an outline of the target, which is visible through blocks, and colored based on the target's team (white by default). Even if a bow is enchanted with Infinity, spectral arrows are still consumed. Spectral arrows can be acquired through bartering or crafted by combining 4 glowstone dust with one arrow, yielding 2 spectral arrows.

In Bedrock Edition, arrows use the following item data values:

Arrows have entity data that define various properties of the entity.

Spectral arrows also have entity data that define various properties of the entity.

Issues relating to "Arrow" are maintained on the bug tracker. Report issues there.