Edit
This article is about the block. For the file format, see Anvil file format.
Anvil 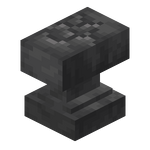 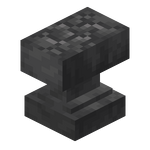 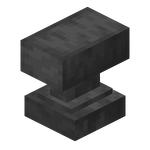 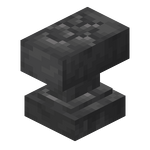 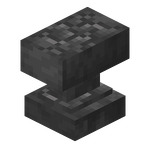 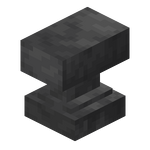 An anvil is a block that allows players to repair items, rename items, and combine enchantments.

Anvils can be mined using any pickaxe. If mined without a pickaxe, they drop nothing.

A damaged anvil generates in the "Forge room" of the woodland mansion.

A total of 31 iron ingots (including 27 for three blocks of iron) are required to craft an anvil.

Anvils have two modes to repair items that have a durability rating:

In addition, the player can rename any item - not just items with durability - by using an anvil.

While in creative mode:

Repairing with materials works for the most part, but not with all items: in general, repairing works for items with their material in the default name. For example, an anvil can repair an iron pickaxe with materials (iron in this case) while an anvil cannot repair bows or shears except with other bows or shears. Special cases: chain armor can be repaired with iron ingots, turtle shells can be repaired with scutes, and elytra can be repaired with phantom membranes. The repair does not need to be complete; one material repairs 1⁄4 of the item's maximum durability. Repair of an unenchanted item can cost more material than simply crafting a new item or combining damaged items. The exception is armor, which consumes less material at the cost of experience levels.

Repairing with a matching item works for any item with durability including bows, shears and so on. The items must be a matching tool and of a matching material. For example, a golden pickaxe cannot combine with a golden sword or iron pickaxe.

In both cases, the resulting durability is limited to the item's maximum, and there is no discount for "over-repair".

As a subset of repairing one item with another, the anvil can transfer enchantments from the sacrifice to the target. This can have a synergistic effect when both items share identical enchantments, or simply add to each other when they do not. Two Sharpness II swords can be combined to make a Sharpness III sword, for example, or a pickaxe with Efficiency can be combined with one that has Unbreaking. This can produce enchantments and combinations that are not possible with an enchanting table. But even so, some enchantments cannot be combined if they are similar, or contradicting, in terms of what they do. If the target is damaged, the player has to pay for the repair as well as the transfer.

Transferring high-level enchantments is more expensive, and renaming an item has an additional surcharge. The anvil has a limit of 39 levels; beyond that, repairs are refused. This limit is not present in Creative mode.

Any item or stack of items can be renamed at a cost of one level plus any prior-work penalty. If the player is only renaming, the maximum total cost is 39 levels. The maximum length for renaming is 30 characters‌[BE only] / 50 characters‌[JE only]. Some items have special effects when renamed:

Any name changes to items are applied to the data tag {Item:{tag:{display:{Name:"{\"text\":\"<name>\"}"}}}}. Similarly, this data tag can be accessed by the nbt argument using target selectors.

Named items do not stack with unnamed or differently-named items of the same type.

Enchanted books are used to enchant tools. Enchanted books themselves can be combined to create higher-tiered books. This makes an anvil an alternative to the enchantment table.

When there is no supporting block below an anvil, the anvil falls in the same way sand, gravel, concrete powder, and dragon eggs fall. A placed anvil cannot be pushed or pulled by pistons,‌[Java Edition only] but a falling anvil can be pushed (though cannot be pulled), as it is an entity. This is different in Bedrock Edition where anvils can be pushed and pulled by pistons. Anvils make a metallic clang sound when they land.

A falling anvil damages any player, mob or item‌[Java Edition only] that it falls on. The damage amount depends on fall distance: 2

per block fallen after the first (e.g., an anvil that falls 4 blocks deals 6

damage). The damage is capped at 40

If an anvil falls onto a block with a solid top surface, but the same block it is in cannot be replaced (torch, slab, etc.), it breaks and drops as an item.

An anvil that falls for 3 blocks and longer destroys any item entity it lands on.‌[Java Edition only]

An anvil can fall into the void if there is a straight path to it.

In Bedrock Edition, an anvil can be used instead of a crafting table to zoom a map out, to clone a map, or to place a player position marker on a map.

However, with the introduction of the cartography table, this feature became dispensable.

With each use, an anvil has a 12% chance to become damaged – degrading one stage at a time, first becoming chipped, then damaged, then eventually destroyed. An anvil typically survives for 25 uses on average or approximately one use per 1.24 iron ingots used in crafting the anvil.

An anvil can be damaged and destroyed from falling. If it falls from a height greater than one block, the chance of degrading by one stage is 5% × the number of blocks fallen.

When used in Creative mode, an anvil does not become damaged.

When an anvil is destroyed, the player automatically leaves the anvil GUI and it disappears.

Issues relating to "Anvil" are maintained on the bug tracker. Report issues there.