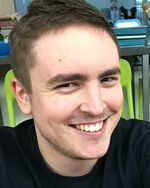 Andy 'Needsmoreclever' Hill is a member of the Minecraft and RenderDragon development teams at Mojang Studios. He also hosted the official Minecraft livestreams Join the Club and Casual Friday. He appeared at multiple Minefaire events throughout the US representing Mojang Studios.