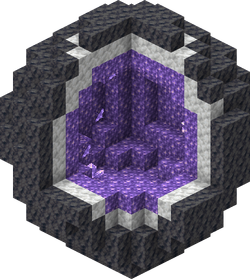 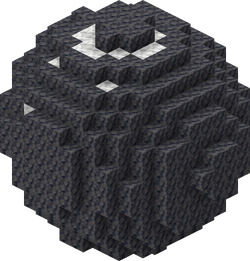 An amethyst geode is a structure-like terrain feature found in the underground of the Overworld. Amethyst geodes contain smooth basalt, calcite, and are the only source of amethyst items and blocks.

Amethyst geodes generate between Y=-64 and Y=30 regardless of whether "generate structures" is toggled on or off. Each chunk has a 1⁄24 chance to generate a geode. They override only caverns and mineshafts. Sometimes they are exposed on the surface, such as on beaches and underwater in oceans.

Amethyst geodes consist of three layers: an outer layer of smooth basalt, a middle layer of calcite, and a hollow layer of primarily amethyst blocks, with 8.3% replaced by budding amethyst blocks instead. Amethyst crystals generate within the structure on budding amethyst. Geodes have a 95% chance of generating with a crack, exposing its inside. Caves, aquifers, and canyons cannot cut into geodes,[1] and as such are often obstructed by them, except in cases where the crack intersects a cavern.

Issues relating to "Amethyst Geode" are maintained on the bug tracker. Report issues there.