From Minecraft Wiki
Jump to: navigation, search
This article is about the sounds that play semi-randomly in the background of gameplay. For the sound produced by flowing water called "water ambience", see Water § Sounds. For the ambient-genre music that plays in-game, see Music.

Ambience (also called ambience sounds or ambient sounds) are sounds that can be heard in specific conditions. They were created by C418 and Samuel Åberg. Currently, there are 167 different ambience sounds.

Ambience is divided into groups of ambience sounds that play under same condition/s. Currently, there are "cave", "underwater" and "Nether" ambiences.

The volume of ambient sounds can be changed individually through "Music & Sounds" in the Options menu by changing the "Ambient/Environment" bar. However, this also affects the sounds of firework rockets and such.

All ambience can be played using the /playsound minecraft:<code name> command. All ambiences' code names start with ambient.<unique code name>.

Note that player needs to put into the command more variables than just name of the sounds. See playsound for more info.

Cave ambience (also known as cave sounds, or eerie noises according to the subtitles) are sounds that occasionally play when the player is underground or in a dark area, based on the mood algorithm.

Cave ambience sounds can play in all biomes except the Nether biomes, as long as there is a cave or a dark enough area present.

This feature is exclusive to Java Edition.
Not to be confused with the sound produced by flowing water.

They can be heard within a body of water of any size and in any dimension.

Nether ambience plays while the player is in the Nether. Each biome has its own unique ambience. There are 126 different nether ambience sounds in total.

Nether ambience is divided into three groups: "Loop", "Loop Additions", and "Mood", all of which play independently of each other while the player is in the Nether.

Mood ambience sounds occur based on a "mood" percent value between 0–100. The mood increases when the player is in a cave or in a dark place, and decreases otherwise. When the mood reaches 100%, one of the sounds plays randomly, resetting the mood to 0% and thus restarting the cycle. The darker it is, and the more non-transparent blocks there are, the quicker the mood increases. in Java Edition, the current mood value appears on the debug screen.

This is the simplified algorithm for computing this value in pseudocode:

This method is called once every tick. It selects a random block in a 17×17×17 area centered around the player's eye position, and alters the mood value accordingly:

This means that if you are in complete darkness and there are no lit blocks around you, an ambient noise will play every 6000 ticks (5 minutes).

Since non-transparent blocks are considered to have a sky and block light level of 0, the mood value increases especially fast if you're in a cave. 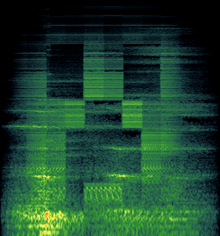 Cave 14 viewed in a spectrogram.