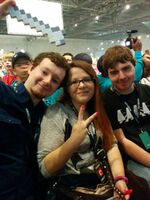 Aleksandra 'MissMarzenia' Zając is a project manager at Mojang Studios since September 2015.[6][4] From April 2013 to September 2015, she was a customer support agent.