This article is a stub.
You can help by expanding it.
Agnes Larsson 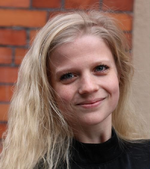 Larsson was born in Sweden and comes from Falkenberg located in southwest Sweden.[6]

She earned a master's degree in Applied Physics and Electrical Engineering in 2013. Before joining Mojang, she was employed by 2 companies, Configura and Scania Group.

Larsson led designs of new additions to Minecraft, such as icebergs, turtles and llamas. She is known for appearing in the Minecraft Live videos that show her and Jens Bergensten in a 2D type of Minecraft, and her goal is to create as much player happiness as possible using Minecraft updates, encompassing many gameplay styles.