Edit
watch 28:07
Minecraft Interactive Experience
Do you like this video?
Play Sound
This article is about the edible item. For the April Fools' snapshot itself, see Java Edition 3D Shareware v1.34.

This article documents an April Fools' joke.
This feature was exclusively part of a joke version and is not currently planned for addition to regular Minecraft.
It is documented here on the wiki due to being officially-released content by Mojang Studios, even if not present in a final version.
3D 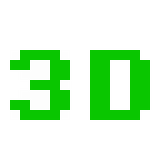 3D was a joke item from Java Edition 3D Shareware v1.34. Eating it shows a picture of the developer cast.

3D was dropped by a creeper summoned by the cheat code "NEEEERD".

Eating the 3D item when the hunger bar was not full shows a picture of the developer cast of Minecraft.