It has been suggested that this page be merged with Minecraft#Awards. [discuss]
If this merge affects many pages or may potentially be controversial, do not merge the page until a consensus is reached.
Reason: A page about a single award show isn't necessary, plus the information at the bottom is already mentioned on Cake. 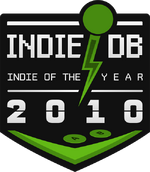 Indie of the Year is the largest celebration of hobbyist, amateur and professional Indie developers. With record attendance and a massive number of updates, releases and new projects 2010 was a year like no other, packed to bursting with goodies to make anyone who is tired of the boring triple A games excited again.

When news comes into this site, its my job to sift, edit and place all of it so it is safe to say that I see everything that you guys make. This year during phase one of our respective MOTY/IOTY event the amount of news flowing into ModDB and IndieDB has seen a huge increase, I barely have enough time to spend on my other "end of year" projects, however like last year there are a few teams of people doing some interesting promotions to get extra votes. -- Henley, ModDB Staff

In previous years MOTY's and IOTY's we have focused on the mods and games that the year produces. This year I showcase the teams behind the games you all know and love. The developers who have stood out either by doing what they do best (developing) or by just being awesome guys. -- Henley, ModDB Staff

2010 saw many inspiring releases that have created quirky or interesting mechanics for gamers to enjoy throughout the year. To be nominated for an award in Most Innovative, unique gameplay is key.

2010 was a great year for multiplayer focused Indie players, with many new exciting projects and new mp expansions it was a good set of releases. To be nominated for an award in Best Multiplayer Indie projects need to have been updated significantly during 2010 and be multiplayer focused. -- Henley, ModDB Staff

2010 was a great year for singleplayer indie releases. To be nominated for an award in Best Singleplayer Indie projects need to have been updated significantly during 2010 and have a Singleplayer portion.

After countless days spent voting, promoting and deciding it all comes down to this. Minecraft is the very first winner of the first annual IOTY contest and claims all the bragging rights that comes with it!

Markus "Notch" Persson, creator of Minecraft, promised that if he won the 2010 IOTY's Best Game award, he would add cake to Minecraft. The game not only won Player's Choice indie of the year, but also Editor's Best Single Player, Most Innovative, Best Developer and Best MOTY/IOTY Promotions, as well as runner up in the Editor's Best Multiplayer. Cake was added as an edible, placeable item when Java Edition Beta 1.2 was released. [tr:2010 Yılın Bağımsız Ödülleri]]