In the Overworld, zombies can spawn in groups of 4 at a light level of 7 or less.

Despite being shorter than 1-block tall, baby zombies require a 2-block tall space to spawn.

Baby zombies have a 15% chance to want to be a jockey, and if they do, then upon nearing the player and before attacking, they check for one of the following and mount it: adult zombies, chickens, sheep, cows, pigs, llamas, ocelots, foxes, pandas, mooshrooms, untamed cats, untamed wolves, horses and variants, spiders and cave spiders.[Bedrock edition only]

A zombie can also spawn from a husk that drowns in water but converts to a drowned if its head remains submerged.

Zombies may spawn from spawners inside dungeons. 50% of dungeon spawners generate as Zombie spawners.

Baby zombies make up 5% of zombie spawns. They behave similar to regular zombies, with the following differences: 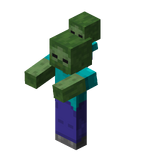 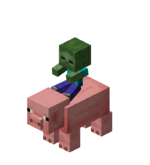 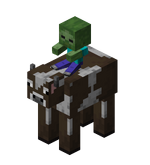 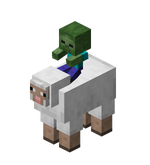 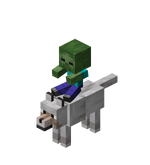 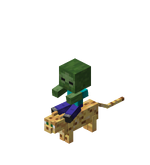 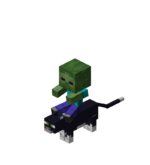 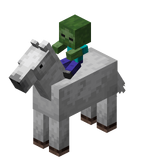 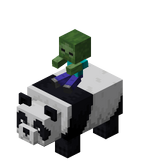 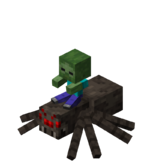 Baby zombie riding mobs other than chickens.[Bedrock edition only]

The jockey mobs ridden by the baby zombie adapt the speed of its rider. For example, chickens ridden by baby zombies move much faster and aggressively toward the player.

Zombie villagers have a 5% chance of spawning in place of zombies, and may also spawn from a villager killed by a zombie. Şablon:IN, zombies spawned from a Spawner are never zombie villagers, although zombie spawners produce them Şablon:İn.

They can be cured back into villagers using a weakness potion and a golden apple.

Husks often spawn in desert biomes in place of zombies. They attack like regular zombies, but inflict hunger for several seconds and do not burn in sunlight.

Drowned spawn in rivers, most of oceans or when a normal zombie drowns. They are able to swim and breathe underwater as well as walk on land. Most drowned use melee attacks, but some spawn with Tridents and throw them when attacking instead.

Şablon:IN, zombies that are wearing armor and go underwater continue wearing the armor when converted to a drowned, although tools and weapons are lost.

Şablon:IN, zombies that convert to drowned drop all worn or held equipment with full durability.[verify]

Some zombies spawn wearing armor and holding tools, which may be enchanted. The chances of that event are listed below. Zombie villagers can also spawn naturally with armor, weapons or tools. If a zombie spawns wearing multiple pieces of armor, the armor is never mismatched (i.e. all pieces are made of the same material). Zombies cannot naturally spawn with netherite armor.

), giving 1.6 - 8%[Java edition only] / 8%[Bedrock edition only] damage reduction from most sources. Zombies can also wear mob heads, although they need to be dropped by the player before the zombie picks it up and puts it on.

Geared zombies that drown (including variants like husks, which first transform into zombies before suffocating) drop the gear they were holding or wearing at full durability with enchantments intact, when they transform into drowned.

Any zombie that spawns with equipment gives Şablon:Xp extra experience points per item when killed.

When they die, zombies drop 0–2 rotten flesh. The maximum drop is increased by 1 per level of Looting, for a maximum of 0-5 with Looting III.

A zombie also drops a zombie head when killed by a charged creeper.

Any picked-up equipment has a 100% chance of dropping and drops without changing the damage that has accumulated on it.

Zombies have an 8.5% chance of dropping their naturally-spawned equipment and drop it with a random durability. Each level of Looting increases the chance by 1 percentage point (11.5% with Looting III).

Zombies spawn in groups of 4 (in easy 1). They pursue the player on sight from roughly 40 blocks away, as opposed to 16 blocks for other hostile mobs. The detection range of zombies is reduced to half of their normal range (20 blocks) when the player is wearing a zombie mob head.[Java edition only] Zombies periodically make groaning sounds, which can be heard up to 16 blocks away. Zombies attempt to avoid obstacles, including sheer cliffs and lava, and try to find the shortest path toward the player.[1] Unlike skeletons, zombies do not try to avoid being hit and continue to pursue the player even when being attacked. Zombies can sometimes deal damage through a closed door, as shown in the picture to the right. Zombies sink in water, facilitating their transformation into drowned.

At dawn, generally when the sun is 15 degrees or more above the ground (that is, when the moon can no longer be seen), zombie variants except for husks and zombified piglins burn once exposed to direct sunlight. Burning is suppressed when the zombie is:

Glass does not prevent them from burning. You can check light levels using F3 in Java Edition.

Zombies may make some attempt to seek out shade during the day, or enter bodies of water to protect themselves from burning up, but they leave protective areas to chase a nearby player or villager.

Similar to skeletons, some zombies are capable of automatically picking up dropped items that they come across. Jack o'lanterns[Java edition only], mob heads, and pumpkins are automatically worn on their heads. Zombies can use armor, weapons, or tools. If a zombie encounters another similar item, it may drop the previous item in favor of the new one, if:

A zombie holding a picked-up item does not despawn when left alone.

Zombies target villagers within 42 blocks, and they can always see villagers through walls. Once a zombie has targeted a villager, the zombie ignores any other villagers and the player, until its target is dead or the zombie is attacked.

Zombies target wandering traders within 35 blocks and can see traders through walls. The zombie focuses solely on the trader unless it's attacked, or either it or the target is killed or moved out of range, or under the invisibility status effect.

Up to 10% of zombies (depending on regional difficulty) in pursuit of a target can bang on closed wooden doors, and on Hard (and Hardcore) difficulty can succeed in breaking them down. Otherwise, the door cracks but does not break.

On all difficulty levels, damaged zombie mobs (including husks, drowned and zombified piglins) also call all other zombies within a 67×67×21 to 111×111×21 area[n 1] centered on the attacked zombie to target the attacking player, like zombified piglins.

Şablon:IN, on Hard difficulty, zombies can spawn additional zombies to "help" when damaged. Each zombie has a "likeliness to call reinforcements" statistic ranging from 0–10%, and "leader" zombies (0–5% depending on regional difficulty) get a bonus of 50–75 percentage points to the stat. When the zombie is damaged by an entity or is damaged while targeting an entity, up to 50 attempts are made to randomly choose a spawn location (0 or ±7–40 blocks away in all three axes) that is above a block with a solid top surface, has light level 9 or lower, has no players within 7 blocks, and has no colliding entities or blocks at which to spawn the reinforcement. Both the damaged zombie and the new zombie has a 5 percentage point penalty to their "likeliness to call reinforcement" stat, preventing infinite zombies from spawning this way.

These effects can be negated by killing the zombie in as few hits as possible, by using environmental damage such as cactus or lava, or by avoiding them completely. That is, if the zombified mob drops experience, it has a chance to spawn reinforcements. Additionally, reinforcements do not spawn at all, even on Hard difficulty, if /gamerule doMobSpawning is set to false.

Zombies attack baby turtles and actively seek out and destroy turtle eggs within 24 blocks horizontally and 3 blocks vertically, by jumping on them until they crack and break.

If a zombie's head is submerged in water for 30 seconds, it begins converting into a drowned. The zombie shakes, similar to a zombie villager being cured, and after 15 seconds the zombie becomes drowned. Once this process starts, it cannot be stopped. This time is not affected by the Respiration enchantment.

A newly-converted drowned always has full health even if converted from a damaged zombie.

The converted drowned keeps any items worn or held when it was a zombie. Şablon:IN, an empty-handed zombie converted to drowned has a small chance of holding a nautilus shell after conversion. Also in Bedrock Edition, an item being held or worn by a zombie when it becomes drowned, whether it was picked up or naturally spawned, has a 100% drop rate, which includes any naturally spawned equipment dropping with full durability.

Only normal zombies can become drowned; zombie villagers and zombified piglins cannot be converted.[2] Husks, however, convert into zombies if they drown, and then this zombie converts into a drowned as a normal zombie does.

Zombie have entity data associated with them that contains various properties.