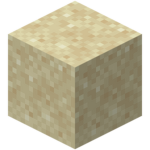 Kum, eğer altında hiçbir blok yoksa falling sand'na dönüşür ve bir bloğa çarpana kadar düşer, thus making it one of five blocks (as of 12w41a) to which gravity applies (the others being gravel, TNT (turns into primed TNT), anvil ( as of 12w41a), and the Dragon Egg). This will happen even if the block of sand is attached to a sticky piston, as the piston will only stick to a block when retracting. When sand is being affected by gravity and falling, it exhibits a smooth falling animation. If falling sand lands on a mob or the player and covers their head, it will suffocate them until they successfully destroy the block, move out of the block or die. If falling sand lands in the space occupied by a non-solid block, (such as torches, slabs, rails, or Redstone), it will drop and turn into a sand resource block. If falling sand falls into lava, it will catch fire (since it's an entity) but still lands and piles up like normal if the falling distance is short. When the sand becomes a block again, the fire goes out; otherwise, the falling sand block burns up/disappears while falling. Also, if it falls onto a cobweb it will slowly fall until it has gone through it completely, or until it touches the ground, at which point it will turn into a resource block. Placing a block of sand into the space directly above a non-solid block will not cause it to turn into Falling sand. Sand blocks can be suspended in indefinite defiance of gravity in this way, most famously using torches. Additionally, if sand is placed anywhere straight up from a painting, it will pass right through the painting as if it wasn't there (the same happens to gravel).

Kum, Airlocks su tıkaçlarında ve mob tuzaklarının yapılmasında kullanılailir. Kum bazı durumlarda iyi bir yapı iskelesi olarak kullanılabilir. Yer çekiminden etkilenmesinden dolayı, it can be quickly and easily removed from ground level and can be used to construct a safe path downwards from a higher position (such as a hole directly down through the roof of a large cavern) even if the ground itself cannot be reached by hand.

In addition, sand is used in the production of glass via smelting and TNT via crafting with gunpowder.

If large quantities of sand and sandstone are needed, the ocean floor is a great source of both of these. To create a cofferdam, find a place in a large lake or ocean that is only one or two blocks deep, and fill in that spot to be just above water level. Then dig a pit inside so that the water can't get back in. With a large enough pit, a large chest can be filled with sand and sandstone fairly easily.

This method can also be used in Desert biomes without the need to drain away water.