Not to be confused with Advancement or Challenges.

"The End?" and "The End." redirects here. For the dimension, see The End.

Achievements (or trophies on PlayStation) are a way to gradually guide new players into Minecraft and give them challenges to complete. In Şablon:Editions, a system of advancements accomplishes this instead. 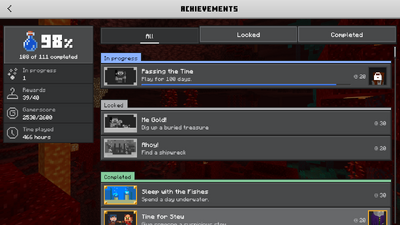 The achievements UI as seen in Bedrock Edition.

They are independent of one another, allowing players to get them in any order. Once earned, they cannot be reset.

Achievements are earned only in Survival mode. If the game is saved while in Creative mode or if cheats are turned on, the ability to earn achievements/trophies in that world is permanently disabled. Going back to Survival mode or turning off cheats or using external programs does not re-enable it.

Except on PS4, an Xbox Live account is used to track achievements. The game can be played without being logged in, but achievements cannot be earned when doing so. On the PS4, trophies are logged when logged in to PSN. Otherwise they are stored locally and will be synced once logged in.

Achievements grant the player gamerscore, totaling 2,600. The achievements also show characters instead of blocks or items.

Since Bedrock Edition 1.16.0, achievements also give rewards, which include emotes and character creator items. They can only be unlocked by completing their respective achievement. As of style="background-color: #FFC7CE; color: #9C0006;" |bedrock, there are 43 achievements that offer rewards for their completion.