The game starts in winding stone chambers that needs to be explored. At the very beginning you will find a niche with a pile of loot on the floor. You can take the following items to put in your inventory:

The inventory has 4 slots to put armor, 2 for weapons, 1 for quiver and amulet, 2 for apple and 2 for ring, totalling up to 12 slots. 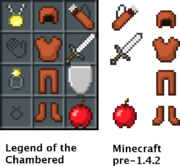