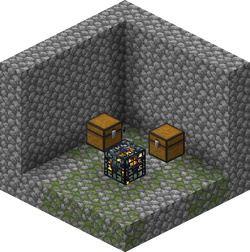 Dungeons ("ดันเจี้ยน" แปลว่า กรุ, ห้องใต้ดิน) were introduced in the "Seecret Friday Update 2" to Infdev. They are small rooms made of Cobblestone and Moss Stone that contain a hostile Mob Spawner and between 0 and 2 Chests. Dungeons are the only places that Moss Stone can be found in a natural map. Anyone exploring a cavern should be wary of encountering a dungeon, as they are almost always connected to a good-sized one, and are very dangerous. Dungeons exist on peaceful mode, as they are generated with the map, however the Monster Spawner will not spawn any monsters.

The Mob Spawner acts as a guard against the loot, spawning endless mobs until the player can light up the room enough to stop new mobs from being spawned, or simply break the spawner itself. The Mob Spawner is always in the center of the dungeon room with chests located around the walls of the room (large chests can connect with the short side against the wall). The chests contain randomly generated treasure that are placed in random slots. It is possible to find a Dungeon almost anywhere in the ground, but they rarely spawn high in the stone layer of a map. There are reports of dungeons being generated in unusual locations, as shown in the gallery below.

In a future update, Notch may add boss monsters into dungeons[2]

This information was obtained from the Minecraft code. The generation algorithm places one of these items in a random slot in the chest eight times, possibly overwriting items already placed.

It is possible that adventure mode will be based upon dungeons.