All double slabs above data value 8 have the seamless tag. This displays the top texture of the slab on all 6 sides. This is only visible on four slabs: stone, sandstone, red sandstone and quartz. All other seamless slabs look identical to their normal counterparts. Breaking seamless slabs will yield two of their respective slabs, which will create normal double slabs if stacked.

Wood blocks with data values 12 through 15 have the bark texture on all 6 sides. These are not found naturally and cannot be crafted, though they are obtainable with commands. When obtained in the inventory and placed, they will act like a normal wood block, placing with their axis corresponding to the face of the block clicked.

Before unique slabs corresponding to different wooden planks species were added, oak wooden slabs were treated like other stone-type slabs. They required a pickaxe to break, had a blast resistance greater than normal planks, and had stone sounds. They are still obtainable in worlds which had them in it previously. They are tagged as Wooden Slab, reflecting on the fact oak was the only wood species in plank form. In the Pocket Edition until Alpha 0.11.0, they are tagged as Fake Wood Slab, and will drop normal oak wood slabs when broken. This slab is still obtainable with commands, with damage value 2 and block type wood_old. It has a missing texture in the inventory.

Gigantes are an unused mob added in classic. They appear to be a giant zombie. Giants have no AI and are only intended to spawn when the light level is both greater than 11 and less than 8. They can be summoned using the /summon command.

The killer bunny is a variant of the rabbit that is hostile to all players and dogs. Its fur is pure white with blood-red eyes that are horizontal, compared to a normal rabbit's vertical eyes.

On peaceful difficulty, the killer bunny will not despawn, despite its hostile nature. It will still attack wolves and pet dogs.

The Killer Bunny can only be spawned with the /summon Rabbit ~ ~ ~ {RabbitType:99} command.

The uncraftable potion is a potion added in the 1.9 snapshot 15w44b with no effect that is unobtainable in survival. It is also available in splash potion and lingering potion forms, as well as for tipped arrows. Its use is unknown.

It can be obtained using the following command: /give @p minecraft:potion 1 0 {Potion:"minecraft:empty"}.

There are also potions that cannot be brewed, and give you status effects not intended to be received by potions; e.g. Wither, Nausea. Again, these can only be obtained through custom potions.

Various status effects remain unused in the game. They can be obtained using /effect[inglês] or potion NBT data, but have no way of being obtained other than that.

Blindness is a status effect which creates thick black fog around the player.

During the 1.6 snapshots, the health boost status effect was added. It boosted the player's hearts for a temporary time. It could be obtained from eating a golden apple.

In the next main snapshot, golden apples give the player absorption instead of health boost, but the effect was still left in the game.

Strangely in 1.9, the developers gave the Health Boost effect a new texture from its original golden heart texture, despite the fact that it still not in use.

Saturation is a status effect added in the 1.6.1 pre-release. It causes the hunger bar to refill by 1 (

Loops were unused sounds, found in the game files, and were possibly meant for when the player is in a specific type of location (i.e., in caves, woods, the ocean and beside a waterfall).

They were found in .minecraft/resources/sound/loops/, and could be converted to reveal four loops, of birds chirping, cave chimes, ocean and waterfall noises.

However, the "Breath" sound is still usable by running "/playsound random.breath @p" in chat/command blocks.

In the particles sheet, there is an angry villager head which remains unused. 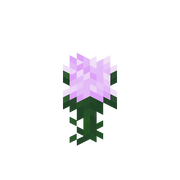 Paeonias are unimplemented flowers that were replaced by the two-block-tall peonies.

There was only one screenshot of the block released by Jeb. Its texture file can still be found; it is named flower_paeonia.png.

Purple arrows were shot by skeletons in Survival Test and acted the same as regular arrows, and used a texture on the same sheet as the normal arrows, but the texture is not currently in use.

In 1.9, a new texture was added for arrows, causing the original arrow texture including the purple arrows to be entirely unused.

On May 21, 2012, Jeb released a screenshot of himself testing the trading system. At this time, what would become emerald ore in 1.3.1 was ruby ore. The previous ruby texture remains in the ruby.png file. It is unknown if the texture will ever be used. Dinnerbone stated in a forum post[1] that they went with emeralds instead of rubies at the last minute because he is color-blind and he had a hard time spotting the difference between ruby ore and redstone ore. The names "Ruby Ore" and "Ruby" are still in the .lang files.

The villager speech bubble is an image that got added along with the villager.png file in the jar when the trading system was added. It showed a trade, where raw chicken could be sold to villagers for another raw chicken. Both raw chickens have the old texture. Its use is unknown.

In the 1.9 Resource Pack, part of the bubble is overlayed with the selection arrows, meaning the texture has no purpose.