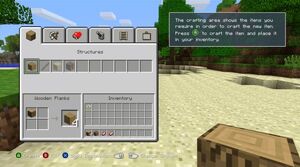 Xbox 360 Tutorial Mode is a short walk through of Minecraft's basic mechanics. It allows newcomers to familiarize themselves with the game, primarily with the controls and the crafting system. Found only in the Xbox 360 Edition, the tutorial takes place in a flat area, with trees in small clusters around the side. It will not let you leave the enclosed area until finishing or canceling the tutorial, though the player may do whatever they want within the enclosed area. Around the rest of the world there are approximately 12 hidden chests containing items and a music disc that you can search for.

Other tutorials for items such as beds, Nether portals, boats, pistons, and fishing rods will pop up, but are not part of the main tutorial.

The Minecraft logo as it appears in the tutorial.

Music disc 1: On your way to the mansion there is a chest inside the abandoned mining shelter.

Music disk 2: Through the shelter is a garden with crossed walkways. Dig down in the middle of the cross of cobblestone to find a chest.

Music disk 3: After that, walk left into a Desert biome and there will be a minecart. Jump into it and ride it to the other end. Then jump off and go inside the Desert Temple and you will find the chest.

Music disk 4: Climb up the ladders or vines on the side of the garden wall or the back of the castle. Turn left and get onto the roof of the castle. On the top of the glass dome will be a chest.

Music disk 5: Once you climb up the ladders turn right then jump of the wall to the left. Walk around the spawn point until you find a medieval tower in the distance. On the top of the tower is a chest.

Music disk 6: Inside the castle, walk into the first corridor to your right that has stairs in it. Pull the lever to your right to make a walkway across the lava and there is your chest.

Music disk 7: In the second room to the right will be a brewing tutorial. You will make a Potion of Fire Resistance using waterbottles, then nether wart, and at last magma cream. This will create a few fire resistance potions. Drink it and walk through the lava in the room. Through the lava is a chest in a small room.

Music disk 8: Walk to the main hallway and travel upstairs. Flip the lever and you'll hear three musical notes play. That lever has revealed a secret room. The painting that you saw when you came up the stairs has the entrance to the secret room behind it. There is a nether portal in that room. Step in it. From your spawn point in the Nether, head directly forwards to the Nether Fortress. In there turn to your second right, down there is the chest.

Music disk 9: Walk straight forward in the Swamp biome to find a house. A chest is beneath it. Walk inside the house and open a trap door. Travel down the ladder and there is the chest.

Music disk 10: From the Swamp house, walk right and you will find a pond with structure submerged in it. It has a trap door surrounded by glass that leads to the chest.

Music disk 11: From the abandoned mining shelter walk in the Mansion courtyard and travel north through the farm(according to the map). Past the farm walk north/northwestward untill you find a set of five pillars with a staircase leading downward. In the underground dwelling there is a chest containing the last disk and an axe.