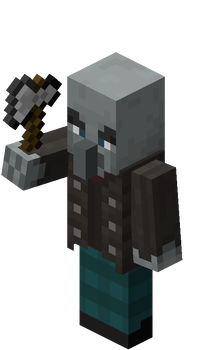 Vindicators spawn during the generation of woodland mansions, in particular rooms. Some rooms will contain 1, others will contain 3, and some will contain 2 accompanied by an evoker. They will not respawn after their initial spawn, thus there are a limited number of them per world. Vindicators that are generated with mansions do not naturally despawn.

Illager patrols spawn a maximum of five pillagers (weight 55) or vindicators (weight 27) 200 blocks away from villages on grass or sand with a block light level of 0–8 and a sky light level of 10–15.

Vindicators are able to spawn as part of raids.

Vindicators only drop loot when killed by a player or tamed wolf. They will drop when they die:

Vindicators are hostile towards players, iron golems and villagers. They will try to attack them, raising their main hand and brandishing an iron axe. When in pursuit of their target they will sprint toward them, slightly faster than the player's walking speed. When not attacking, they cross their arms similar to a villager, and don't show the axe in their hand.

A vindicator will not pursue the player through the iron door of any naturally occurring woodland mansion jail cells, and after a time, will cease hostility as long as the player remains inside.

Naming a vindicator spawn egg "Johnny" and gebruiken it on a spawner will make the spawner spawn normal vindicators, not vindicators named Johnny.Sjabloon:Only

Vindicators have entity data associated with them that contain various properties of the mob.