Bewerken
watch 01:36
We're Getting Mutants in the MCU - The Loop
Do you like this video?
Play Sound
Oerwoudtempel 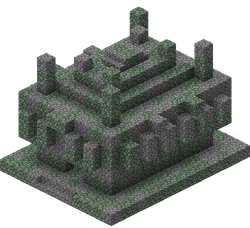 Jungle Temples are generated structures primarily made of Cobblestone and Moss Stone that occur naturally in Jungles. Due to their prominent similarities, Jungle Temples could be thought of as the equivalent to woestijntempels. For example, they both include traps and hidden Chests.

Jungle Temples bestaan meestal uit keisteen en Moss Stone. There are a small number of chiseled stone bricks, blocks that could not be legitimately obtained in Survival mode before Jungle Temples were implemented. There are three floors; on the bottom floor, there is a room with a puzzle (three Levers connected to some Sticky Pistons). Solving the puzzle will open a secret door (piston door) with a Chest behind it filled with loot. The loot can be valuable or useless, as the items are selected randomly from a list. This list is the same as the one used for Desert Temples, and includes Emeralds, Horse Armor, and Enchanted Books. Down the hall from the Levers, there is Tripwire connected to a Dispenser filled with Arrows. Farther down the hall there is a chest with the same list of possible contents as the hidden chest. In front of the chest is another Tripwire connected to another arrow-shooting Dispenser. Both Dispensers are covered in Vines, making them hard to see. The Dispensers each contain between 4 and 14 arrows.

When attempting to access the chest, the player must take care not to step on the Tripwire in the middle of the hall. Though looking like mossy cobblestone, hidden behind some vines is a Dispenser filled with arrows. The Dispenser will fire when the Tripwire is stepped on or broken without Shears.

The solution to the puzzle depends on which side of the staircase the Levers are located. To guarantee the door will open, use the following succession:

If possible, it is recommended that the player takes the arrows from the Dispenser, as they may be used to remake a trap or be fired with a bow later.

Alternatively, breaking through the walls with a pickaxe is an effective method of bypassing the puzzle and taking the loot.