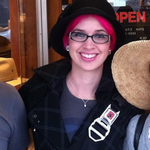 Lydia Winters is Mojang's "Director of Fun". She works with the community and part of this job requires her to attend Minecraft related events such as Minecon and PAX East as Mojang's representative as well as provide coverage and make appearances on Mojang livestreams. Her job title represents the fact that she is meant to make events and livestreams more entertaining.

Lydia first met the senior staff members of Mojang at the Sony Ericsson booth she was running to promote the Pocket Edition of Minecraft. She got along well enough with the staff members that she was offered a community relations position in the company.[referentie gewenst] At the time she joined Mojang, she had hair dyed pink and was known as MinecraftChick. While she no longer dyes her hair pink in real life, her mojavatar and skin still has the pink hair. She now uses the Twitter handle @LydiaWinters instead of @MinecraftChick.