The game starts in winding stone chambers that need to be explored. At the very beginning you will find a niche with a bunch of loot on the floor. You can take the following items to put in your inventory: 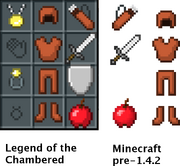