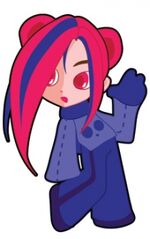 Hayden Scott-Baron, also known as "Dock", was the first person to join Mojang (then still called Mojang Specifications) as the artist of Minecraft. He joined in December 2009,[2] but left shortly after in February 2010 due to work-related issues, as well as several problems regarding animations.[3]

The unused Minecraft logo, made by Dock

Dock is the creator of the mobs Rana (a character of his, merely used for testing purposes), Steve, Black Steve and Beast Boy, notable by their striking difference in style compared to other mobs. He also made a new Minecraft logo that went unused, as well as concept art.