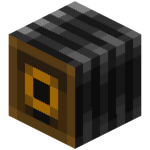 In the Education Edition, using a camera from one's inventory will take a first-person screenshot. It may also be placed, creating a camera entity that can track the user, and take pictures from the camera's perspective. Photos taken with the camera appear in the portfolio.

Close-up snapshots of an item on the ground can be taken by holding the Shift key while right-clicking.

At the Minecraft Pocket Edition panel at MineCon 2012, as well as one of Jbernhardsson's livestreams, it was stated that future plans include trying to have a proper use for cameras, perhaps an easier way to take screenshots and share them with others.[5] In the BlockTalk Q&A, the camera was briefly mentioned as part of a broader "sharing" theme planned for MCPE in the future.[6] It later got implemented into Education Edition, using the camera to make screenshots and share them in a special book.