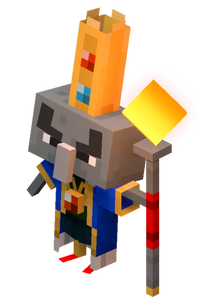 Before the events of the game, Archie was an exile from his people due to him being an Illager, repeatedly searching for a village to call home, only for the Villagers of the Squid Coast to reject him, after getting in a scuffle with 5 heroes.

Eventually, Archie stumbled upon a mountain cave containing the Orb of Dominance. In an almost hypnotic state due to the Orb's power, he snatched the Orb and quickly took on the title of the Arch-Illager, gaining immense power over his people. He then used his army of Illagers to raid the villages, taking their Villagers as slaves. He also collaborated with the evil Witches who live in Soggy Swamp and making and dealing with potion supplies, and even developed a forge to create machines such as the Redstone Golem and the Redstone Monstrosities, not only that, the Arch-Illager wanted to find the Nameless Kingdom within the Desert Temple and take Nameless One's staff to summon an undead army.

The Arch-Illager repeatedly appears in the game to summon Illagers to attack the players, which occurs less often as the game progresses.

The Arch-Illager has 3 attacks. Sometimes, he teleports around the arena between attacks.

Since he is not much of a warrior, The Arch-Illager summons his darkest creations, a group of Illagers to assist him, usually, a ring of Vindicators around the player or a line of Pillagers through the center of the arena, however, this attack can rarely spawn a Redstone Golem instead. Unlike the Vindicators and Pillagers, the Redstone Golem does not despawn once the Arch-Illager is defeated. This attack is used sparingly.

The Arch-Illager fires 3 purple energy blasts in a horizontal swath towards a random player. Deals moderate damage if it hits. Used extremely often.

The Arch-Illager can enchant hostile mobs in the same way that the Enchanter does.

The Arch-Illager was known as Archie at first, and lived orphaned in a Woodland Mansion with their Leader being an Evoker named Walda. An Evoker named Thord was Archie's bully.

What type of Illager he was is unknown, since he had no experience with magic or combat. He was banished from his tribe after being blamed for causing a hero named Karl destroying a raid party he was forced to join. He very quickly fled to the nearest village, and while most of the villagers distrusted him, a villager named Yumi was kind enough to take him in as her own, before he was forced to flee again.

When he found the Orb of Dominance, it repeatedly told him it was Archie's destiny to rule the world, although he denied this. Archie would unite all the Illager tribes under his rule, taking the title of The Arch-Illager in the process. Eventually, the Orb fully took control of his mind and led him to take revenge on the villagers and the heroes of the world. [情報提供依頼]