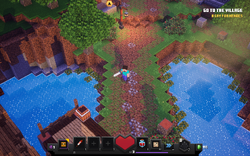 Squid Coast, once a thriving town, is now burning thanks to the evil Arch-Illager and his minions. Vindicators and skeletons have left Squid Coast in ruins, leaving buildings to be burned. The villagers have fled their homes, leaving possessions behind, waiting for heroes to save them. Heroes must make haste and fight their way through paths to save the Villagers.

The end of the Squid Coast level becomes the lobby of the game after the level is completed and contains a mission selection table and the occasional lobby chest. As the player progresses through the game, the Blacksmith appears, who sells them random Gear in exchange for emeralds as well as upgrades it. The Wandering Trader who sells the player random Artifacts in exchange for emeralds and the Gift Wrapper who lets a player trade items with other players in multiplayer. The tutorial can be played again but only in offline mode or local multiplayer. The difficulty cannot be changed as it is always set at Default I.