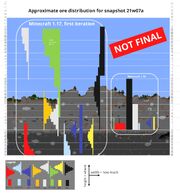 Please note that the names of many features are currently placeholders. They may be marked with the template [非公式の名称]. 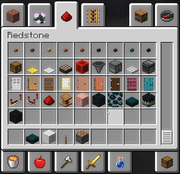 This image shows the sculk blocks in the Redstone tab in creative mode, implying that the other sculk blocks also have redstone uses.

The preview of updated mountain generation given during Minecraft Live 2020.

An example of how the other stones may generate