Szerkesztés
watch 01:36
We're Getting Mutants in the MCU - The Loop
Do you like this video?
Play Sound
Alvilági kvarcblokk 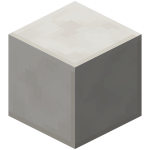 Blocks of Quartz are mineral blocks crafted from Nether Quartz that are used only for decoration. In the Pocket Edition, they are one of the blocks that appear when a Nether Reactor is activated.

Unlike other mineral blocks such as the Block of Iron or Glowstone, they cannot be crafted or broken back into Nether Quartz items. Much like Sandstone, they can only be further crafted into more decorative forms.

To craft quartz blocks in Pocket Edition, you need to use a Stonecutter rather than a Crafting Table.

As a crafting ingredient[]