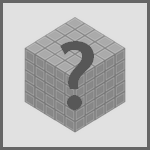 Due to the lack of commands in Pocket Edition, barriers can only be obtained in the inventory via hacks and look almost like a sheet of stone when held.

They spawn naturally as the border of old maps until the height limit. It can be broken by a nether reactor if inside the world, however on the outside, the barrier will simply cut off the structure.

The block in the player's inventory shows up as a red box with a slash through it, but when placed is completely invisible.

Barriers are transparent to light, but interact with blocks and mobs like a solid block. All dependent blocks can be placed on a barrier, such as trapdoors or redstone, and it will suffocate mobs. Mobs cannot spawn on barriers.

When hacked in, they are are called ".name<" when selected.

When placed, barriers grant an X-ray effect, as they are opaque yet lack a texture. They can also be seen through in third person mode, and this can be exploited to reveal caverns and other underground structures. Barriers also cause a shadow. Projectile weapons directed at the block will strangely pass through, and they will be blackened as they are in a light level of 0. Mobs are also blackened, and will suffocate.

If a semi-block, like stairs (with it sloping down towards the block) or a fence is next to the block, the side facing it will be severely blackened, with a light level of 0 as in the barrier itself.