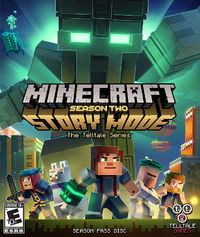 Minecraft: Story Mode - Season Two was an episodic point-and-click narrative-driven graphic adventure video game which is the sequel to Minecraft: Story Mode, released in July 2017 across multiple platforms, with a Nintendo Switch release on November 6, 2018.[2] The game was developed by Mojang Studios, the developer of Minecraft, in collaboration with Telltale Games. Music for the game was composed by Anadel, an atmospheric folk band based in California. The game follows the episodic format that Telltale has used for its previous titles, where player choices and actions have significant effects on later story elements.

On May 31, 2019, it was announced that Minecraft: Story Mode - Season Two would no longer be supported following the closure of Telltale Games. The servers for Story Mode - Season Two were discontinued on June 25, 2019, meaning that the episodes are no longer downloadable.[20] Despite being discontinued, the Xbox One and PlayStation 4 versions are playable on Xbox Series X|S and PlayStation 5 respectively via backwards compatibility.[21][22]

Episode 4: Below the Bedrock

Episode 5: Above and Beyond

The game is separated into five episodes, released in intervals of 1 to 2 months.

Episode 4 - Below the Bedrock Trailer

Episode 5 - Above and Beyond Trailer