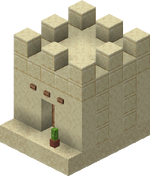 Villages generate naturally in plains, savanna, taiga, snowy tundra, and desert biomes. Πρότυπο:IN, they also generate in snowy taiga, sunflower plains, taiga hills, and snowy taiga hills biomes. The type of the village, and therefore the style of all structures within it, is determined by the biome at the village center or meeting point. If the meeting point does not generate in one of the above biomes, the village defaults to plains style.

If a building or pathway generates over open-air, circular or square platforms of grass or sand (depending on the terrain) generates below the structure, which can cause surface oddities. This can be clearly seen when a village building generates over an ocean. Farms generate a few blocks of open space above them if they happen to generate inside a hill.

Some villages generate as abandoned; see Πρότυπο:Section link below.

A player who kills an illager captain receives the Bad Omen effect for 100 minutes. Like other status effects, Bad Omen can also be cleared by dying or drinking milk. Entering a village boundary while the effect is active triggers a raid, in which groups of illagers spawn and attack the village.

Πρότυπο:Exclusive Zombie sieges are in-game events where many zombies spawn in a village, regardless of how well lit or walled off a village is. They have a 10% chance of occurring at midnight every night or during thunderstorms when a village has at least 20 valid beds.

The number of buildings making up a village can vary, and not every village consists of all building types at once. Apart from the meeting point, which is unique and systematic, the number of buildings of each type is randomly generated and increased in superflat[Java edition only] worlds. The number of lamp posts and decorative structures (hay bales, melon patch, pumpkin patch, farms, snow and ice patches) has no restriction, as they are generated where no other buildings can be placed. These structures could have functions, and could be of great use to the player. Paths are found between the buildings of the village and often extend beyond them.

Architecture style, and blocks making up the village structures, vary according to village type. Not every building can generate in a single village, although some blocks can be found in any village, such as job site blocks and food items.

Πρότυπο:IN buildings have different probabilities of generating, depending on village type; for example, a weaponsmith shop is more likely to appear in a Taiga village than other villages.[1]

In plains, savanna, taiga, and snowy villages, paths are comprised of grass paths and grass. Savanna villages also generate farmland and crops in some paths. Grass paths that generate over water are replaced by the village style's planks type. Desert villages generate with smooth sandstone paths.

A village has a chance of generating as an abandoned village (formerly zombie village). This chance is 2% Πρότυπο:In, and appears to be 25%–30% Πρότυπο:In.[3][4]

Villages are established by the number of valid beds in the village. Πρότυπο:IN, a "valid bed" is a bed unobstructed by other blocks so that it can be used for sleeping.

Πρότυπο:IN, a village is created when at least one villager links to one bed. The village continues to exist as long as one one of its villagers remains linked to one of its beds. If all beds are unlinked (by being destroyed, by players sleeping in them, or by villagers failing to pathfind to them), then the village ceases to exist. When this happens the villagers lose all links to job site blocks and bells, and cannot use them.

When the first villager links to a bed a village of size 64×24×64 blocks is created, centered on the pillow of that bed. The boundaries, and consequently the center (which is important because it defines where cats and iron golems can spawn), may change as other villagers link or unlink from point of interest (POI) blocks. When the boundaries change the center usually shifts to the location of POI block near the midpoint between the farthest out POI in each direction. In naturally generated villages there is usually a bell near the village center, but aside from that bells have no special role distinct from other POI in how the game defines and manages the village center and boundaries.

Villages have gathering sites where villagers may mingle. A gathering site is defined as a bell located within the village boundary. A wandering trader may spawn at a gathering site, accompanied by trader llamas.

Iron golems spawned by a village will be hostile toward any player who has a popularity score of −15 or less.

Issues relating to “Village” are maintained on the issue tracker. Report issues there.