This guide is intended for those who are unfamiliar with surviving the night beyond the first day.

It will be most beneficial for those who have read the beginner's guide first.

A brief picture of a second day house is shown on the right. 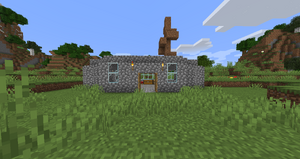 A cobblestone house with a dirt pillar for visibility

If you read the Beginner's Guide and followed it you should have at least a hole in a hill with about 2 torches, a Crafting Table, and a worn-down wooden pickaxe. This day will guide you in making a cobblestone house, instead of your hole in a hill.

When you venture outside after surviving your first night, be on the lookout for hostile mobs. Later, you will be hunting them, but that's after you get both weapons, and a proper food supply. Also, keep track of where you are, using the debug screen if needed. If you do get killed at this point, you haven't lost much, and you're presumably still near spawn -- just head back to your death site to collect your few items.

At this stage, creepers are deadly -- run away until they despawn or lose track of you. Skeletons and zombies may survive in shady spots; lead them into the sun and avoid them until they burn to death. Spiders will mostly be neutral, so just avoid them; if one has targeted you, lead it into the sun and run it around until it loses interest.

Collect any loose items you see: bones, arrows, rotten flesh, eggs, and wool. Destroy any tall grass you see and collect the seeds. You might break and grab some mushrooms too -- if you can get both kinds of mushrooms, you can make mushroom soup. All these things will help you sooner or later.

The foundation of everything is mining. Begin by mining some stone with your pickaxe. You should craft a stone pickaxe because it mines faster and has more durability. When you mine a stone block, it should drop a crumbly block called cobblestone. This is what you can use to make your house. It has an explosion resistance of 30, which isn't enough to stop a creeper's explosion but it will do for the second day. You can also use cobblestone to make stone weapons and tools. These last longer, with 132 uses. You can make a stone pickaxe by replacing the wooden planks with cobblestone when making a pickaxe. After crafting it, collect approximately 50-80 pieces of cobblestone. Make sure to light up your mine, otherwise you will be killed by the various mobs!

By now it should be the middle of the day. Build a three-block high wall that is about 5×4. Then you can seal it over with cobblestone as a roof, or you can make an overhang on the top to prevent spiders climbing in (that means one block along the outside top edge of the hovel where the walls would turn into roof). Also, leave a 1×2 gap so you can walk in and out.

Side view, walls with overhang:

With the wooden planks you have (if you don't have any, chop down a tree and craft some) craft a door. You can do this by filling up the crafting table with wooden planks in the first two columns from the left (it works from the right too). Collect the wooden door and place it in the gap of your house. Right-clicking on it will open it. Right-clicking it again will close it.

You can also craft an iron door if you have iron. (You'll want to make a couple of levers and/or pressure plates to go with it, or wooden or stone buttons.) Mobs cannot pass through these doors, but can attack you if you place the door from the inside, certain mobs such as the skeleton, which can fire arrows, will attack through the door. To prevent this, go outside of your house and place the door in the doorway. This will be an outward facing door and prevents attacks. Also do not place a wooden pressure plate on the outside of your house if you use a iron door, as this will let the mobs including creepers open the door, and a creeper in the house is a bad thing!

To fix a tool, put two of the same tool in the crafting table next to each other. This will replace the two old items with a new item that is either unused, or has slightly more remaining uses than both the old items together. This applies to any tool that has durability, including swords and bows. Eventually you will have enchanted tools and/or weapons—then you can start using anvils. (Note! You can repair 2 consumed tools of the same type to make a new one. This can save materials because you will repair only 2 consumed tools and not a consumed tool and a new tool.)

If you haven't already made a bed, you should get some wool to make one! Here's a reminder for the crafting recipe:

Here's a tutorial for The Third Day.