How big should a roof be? For inhabited buildings, a good guide is to make the roof between one and two stories tall. If a roof section does need to be much taller than that, consider making it into a tower, or use a mansard roof containing multiple floors.

The height of a roof can often be adjusted by changing its pitch or by adding a parapet and/or a roof-level walkway. Whenever there is enough volume under a roof for another building level, it would be quite unusual not to put in some extra rooms to take advantage.

For example, a building 20m wide with a single 45° gable roof would have a roof that rose to a height of 10—11 blocks. Assuming 4—5 block stories, the roof would be 2—2½ stories high. At that size, it would be advisable either to put an extra floor inside the roof volume, or else split the roof into two or three smaller sections so that the rise per section is around 5—7 blocks. Alternatively, by adding a 1 block high parapet and a 1 block wide walkway around the roof, it is reduced to an apparent height of 7 blocks, which falls roughly within the rule of thumb for roof heights.

For some buildings, a spectacular roof is part of the design. For these 'monumental' buildings — such as churches — making all the internal spaces 'livable' is not a concern, and architectural and aesthetic considerations should take precedence.

Adjusting the height of a roof join.

These illustrations show the effect of adjusting the roof height of one section of a building relative to another. In the first picture, the main building has walls four blocks high and the side extensions have heights of two, four and six blocks. The white quartz steps mark the joining line between the main roof and the side roofs.

In the second picture, the side extension is almost a tower; it has a height of eight blocks relative to the parent building's four. The white quartz block marks the join as before, and the new sandstone bricks mark where the side extension's roof has been brought down to match the height of the main roof.

The final picture simplifies the join considerably by making the side extension into a tower. 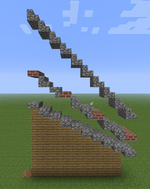 Note in the two 'roof pitch' diagrams how the width of the building significantly affects the look of the steepest roof. When using steeper roofs, or if you want a central 'feature' that is an odd number of blocks wide (such as a door) make the entire building an odd number of blocks wide. That way the roof will come to a point exactly over the central feature. If the center of your building is to have a double door or some other feature with an even width, then the building width should usually be even too.

Other roof pitches need more effort, and not every pitch will look good at every roof size. Try to use a repeating pattern of two or three blocks that generates roughly the right slope; for example, a sequence of slab, upside down stair, stair, slab, upside down stair, stair, rises five blocks vertically for every seven horizontally. As a general rule, the more complex the pattern, the bigger the roof you will need before you can use it.

Once a building is larger than about 15×15 blocks, it will begin to look increasingly strange (or, at best, barnlike) if it continues to have a simple roof. Large buildings usually have multiple roofs in different sections. Think of an English manor house with two wings as a common example. Trying to place a single gable roof over a building like that is likely to look ridiculous. It's at this point that more elaborate roof designs begin to be needed. The following Wikipedia article lists common roof designs and often provides pictures and diagrams: http://en.wikipedia.org/wiki/List_of_roof_shapes

It's quite easy to combine the basic roof designs. For large buildings, mixing different roof designs is necessary to make the building look convincing. This illustration shows a building with a hipped roof and a gable end. The gable end uses red brick blocks so that you can see how the two roof sections merge.

When roof sections are joined together, the combination that results is known as either a cross gabled or cross hipped roof depending on the basic roof types being joined. The resulting compound roof is usually shaped like a T or an L. More elaborate designs may form a cross shape, an H, or any of countless other possibilities. Newly-made buildings usually have a consistent design, but older buildings that have been extended over time are likely to end up with a mish-mash of different styles.

While a small building will usually look fine with a simple V-shaped roof, large buildings need multiple roof sections or they will look strange. That means you will need to design multiple roofs for different sections of a large building and join them together. You can use the roof examples from computer-generated village buildings for inspiration, but smoothly joining up roofs at angles to one another takes a little practice.

If you are new to roof construction, a simple building sequence is as follows:

You will quickly note that when roofs join, they usually do so along a V-shaped line, and roof blocks inside that V will be removed at the final construction stage. Once you understand this behavior, it becomes easier and quicker not to place the unneeded blocks to begin with. But whenever you are dealing with a complex roof structure, it is simpler to build the entire roof and then remove unneeded blocks afterwards.

Building on a slope.

When building on a slope, it is probably simplest to level the area for each building section separately, then build. For the roofs, the common choices are either to give each elevation its own separate section of roof, or to adjust the height of the shared walls to support a single unified roof. 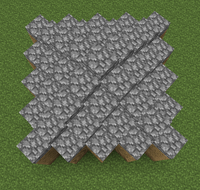 Plan view of a diamond-shaped building. 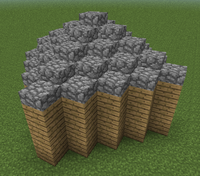 Side view of a diamond-shaped building using slabs for a roof.

It is possible to make buildings in Minecraft that aren't aligned North-South or East-West. Unfortunately, except at very large scales, it is hard to make them look convincing. If you are constructing a metropolis, the occasional odd-shaped building helps enormously to add variety to Minecraft's regimented grid, but normally making these buildings is not worth the extra complexity. The example above is diamond-shaped and uses slabs for its roof. Normally, non-axis-aligned buildings should use slabs or blocks for their roofs, as stairs are often awkward to manage. 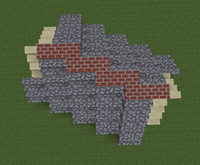 A building made at an angle — plan view. 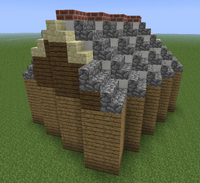 Side view of building constructed at an angle.

This building has walls 'stepped' so that they move 'two along, then one up'. This is approximately equivalent to angling the building at 63°. Note how most of the roof blocks are in parallel pairs, following the course of the wall blocks under them. Note also how filler blocks (quartz in this image) are needed to close off the holes in the sides of the roof. For clarity, the sidewalls of the gable roof use dark wood, and the end steps have been replaced with sandstone. 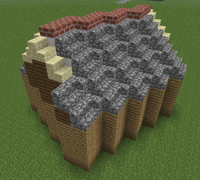 Using corner stairs instead of filler blocks. Note how the sandstone stair blocks still need fillers next to them. 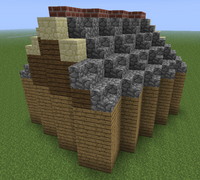 Using full blocks or upside-down stairs instead of filler blocks.

The filler blocks used here are not strictly necessary. By using corner stairs, upside down stairs, or full-sized blocks, the holes can (mostly) be avoided. It's then just a matter of which minor variation in roof design you prefer. However, depending on the roof design there may still be a small number of places where filler blocks are unavoidable.