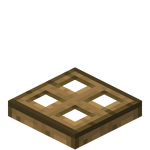 A trapdoor is a solid, transparent block that can be used as an openable barrier.

Wooden trapdoors can be mined with anything, but an axe is fastest. Iron trapdoors require a pickaxe to mine. Trapdoors will remain in place if their attachment block is moved, removed, or destroyed.

A wooden trapdoor may be found leading to igloo basements.

Trapdoors must be "attached" to a block to the side of them. To place a trapdoor, use a trapdoor item while pointing at the block it should be attached to.

A trapdoor's "hinge" will be on the block it was attached to.

Trapdoors can be moved by pistons. Water and lava will flow around trapdoors. Lava can create fire in air blocks next to wooden trapdoors as if they were flammable, but the trapdoors will not burn up (and can't be burned by other methods either).

An open trapdoor may be climbed like a ladder if it is directly above a ladder and on the same side of the block.

The sound of opening and closing of a trapdoor can be heard up to 16 blocks away, like most mob sounds.

A trapdoor can be used as a switchable barrier to entity movement. Although primarily used to block movement by mobs and players, a trapdoor can also be used to control the movement of boats (for example, a top trapdoor placed in a two-wide water flow will stop a boat when closed (extended out into the water flow), but allow it to move again when open), items and minecarts (a trapdoor can stop a falling item or minecart, then allow it to drop again when the trapdoor opens), etc.

Trapdoors are 0.1875 (3⁄16) blocks thick. The rest of a trapdoor's space can be moved through freely and provides a breathable space if placed underwater.

To open or close a wooden trapdoor, use the Use Item/Place Block control. When a trapdoor opens or closes, it immediately changes its orientation without affecting anything in the space it "passes through". Moving trapdoors don't push entities the way that pistons do.

Iron trapdoors can only be opened with redstone power (a button, a redstone circuit, etc.).

Mobs pathfinding considers trapdoors to always be closed, whether they are open or not. This often result in mobs falling through open trapdoors.

Both wood and iron trapdoors can be controlled with redstone power.

A trapdoor is a redstone mechanism and can be activated by:

An activated wood trapdoor can still be closed by a player, and won't re-open until it receives a new activation signal (if a trapdoor has been closed "by hand", it still needs to be deactivated and then reactivated to open by redstone).

Wooden trapdoors can be used as a fuel in furnaces, smelting 1.5 items per block.

A trapdoor is defined by its ID and block data. A trapdoor also has a block state, which is expected to replace the functionality of block data in a future version.

A trapdoor's ID specifies its material:

Issues relating to “Trapdoor” are maintained on the issue tracker. Report issues there.