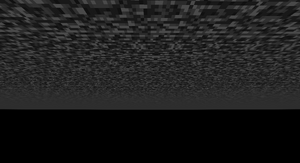 The void is pure black.

The void is the name given to the empty space below layer 0.

) every half second, leading to the player's death in 2 1⁄2 seconds. Armor does not protect you from dying in the void, and death always occurs at Y=-199.10. However, if status effects are used the death level alters only slightly. After this, if the player does not press any buttons, they will usually fall until somewhere below Y=-256, with this number varying on each death. If commands are used to make the player invincible or give them infinite health, they will fall until Minecraft crashes. When you fall into the void on a server with anti-flying measures, you are kicked out regardless of having a flying mod. Riding a vehicle into the void will result in the player being stuck in the vehicle until they die.

Αρχείο:Watervoid.jpg
Liquids, such as water, cannot flow into the void.

Other entities may also fall through the void and receive the same damage as the player, with the exception of the wither which appears to take tremendous damage. All entities will disappear at Y=-64. Any entity above layer Y=319 or below layer Y=-64 will be black. In the overworld and in the Nether, a layer of bedrock prevents the player to go to the void. In The End, however, the void is easily accessible due to the large gaps between the islands.

In Pocket Edition, the player's health is depleted by 4 (

) every half second at any negative height. At Y=-32 an invisible barrier is erected, preventing the player from falling further. In Creative Mode, one will not die, giving free access to flying under the void, but if the player falls in Creative, they will eventually land on an invisible surface at about 256 blocks below y=0.

Entering the bottom void is not possible in the Console Editions. Although the player is unable to break the bottom or top layer of bedrock, even in creative, you can enter it by breaking end stone in the end until you get to the void. Then you will die and respawn. If the player does somehow manage to do so in the overworld, attempting to fall into the void will result in the player standing on it. This also happens at the y-coordinate of 511, where an invisible barrier is erected to stop the player going any higher. The invisible barrier for the bottom is not present in the End. If the player is affected with resistance 5+, regeneration 8+ or instant health you can fall infinitely into the void without dying.

Additionally, black void fog exists. It increases with depth as the player descends past Y=17. As the player travels deeper, the fog at the edge of the render distance will grow closer, until the player reaches the deepest depths, where visibility is reduced to just a few blocks, beyond which lay only blackness. There are also dark gray void particles that appeared at level 16 and below, plus in the void. Void fog can be disabled in the options menu to increase performance.

Note: This video is outdated, as void fog was removed in 1.8

Issues relating to “The Void” are maintained on the issue tracker. Report issues there.