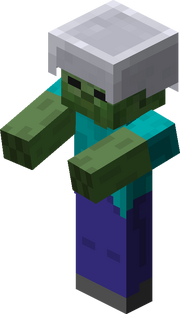 A zombie wearing a helmet in the Survival Test.

Survival Test was a test for the survival game mode of Minecraft released to premium members[1] during the Classic phase of development, and was accessible at http://www.minecraft.net/survivaltest.

In this version, creepers had melee but exploded when killed, the only food source were mushrooms, and you could get them by killing sheep or pigs or finding them in caves. The red mushrooms were toxic and hurt the player by 1 1/2 hearts . The point system was first implemented in this update. The player's fist also took 4 (

) away from the mob the player punched.

Survival Test was removed the website on December 16, 2010 when the site received a major overhaul, during the Alpha phase. Survival Test is not available in the launcher, though it is compatible if the user is able to provide the .jar file.

Some aspects of the point system are listed below:

Points would not be scored for indirect killing (e.g. blowing up a creeper which killed a zombie didn't award the zombie's points).

A handful of blocks are obtained in different ways than in the modern game:

All other blocks found naturally in the world could be picked up normally, with the exception of ores and logs, which drop their resources, stone which drops cobblestone as normal, leaves which also drop saplings like normally, grass blocks which drop dirt (which can handle grass again) and liquids and bedrock which are unbreakable.