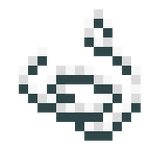 String is used for the crafting recipes of many tools and utilities. When placed as a block, string becomes tripwire which, when combined with tripwire hooks can form a tripwire circuit.

Spiders and cave spiders drop up to two pieces of string upon death.

A tripwire does not need to be part of a valid tripwire circuit to activate, but without valid attached tripwire hooks the activation or deactivation can only update adjacent blocks (for example, activating a BUD circuit).

Issues relating to “String” are maintained on the issue tracker. Report issues there.