Επεξεργασία
watch 01:36
We're Getting Mutants in the MCU - The Loop
Do you like this video?
Play Sound
Stonecutter 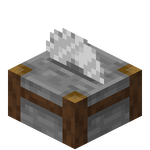 The stonecutter is a Pocket Edition exclusive block which is unobtainable in survival. Since version Alpha 0.13.0 it no longer has a purpose.

The stonecutter is only available via creative mode. It is unobtainable in survival, and only exists in survival worlds where one existed prior to Alpha 0.13.0. However, it can be used as a decorative block when obtained from the creative mode inventory.

The stonecutter is used only for decorative purposes. Its purpose was to craft all types of stone blocks, but it was replaced with crafting tables in Alpha 0.13.0.

Before version 0.13.0 the stonecutter was used to craft every stone-type block in Pocket Edition except itself, furnaces and mineral blocks. It used the MATTIS crafting system, the same system used by the crafting table. It was used to craft the following before removal: