Every world has a "spawn point" (really, an area) located within a few hundred blocks of the origin, which is at coordinates 0x, 0y, 0z. This point is stored in the level.dat file's SpawnX, SpawnY, SpawnZ attributes (although SpawnY seems to be ignored). If the spawn point is deemed unacceptable, a new, temporary spawn point will be selected (although the criterion for "acceptable" is unknown).

A player with no spawn point set (such as by a bed) will be placed randomly at the highest point in a 20x/20z square centered on the x-/z- corner of the spawn point; that is, the 20x/20z spawn square's edges are at SpawnX -10/+9, SpawnZ -10/+9. The 10 block radius can be changed using /gamerule spawnRadius though.

On multiplayer servers, a 33x/33z slice of the world centered at SpawnX, SpawnZ can, at the server owner's or operator's option, be set as "protected", and can then (almost; see below) only be modified by Operators; that is, the 33x/33z protection square's edges are at SpawnX +16/-16, SpawnZ +16/-16. 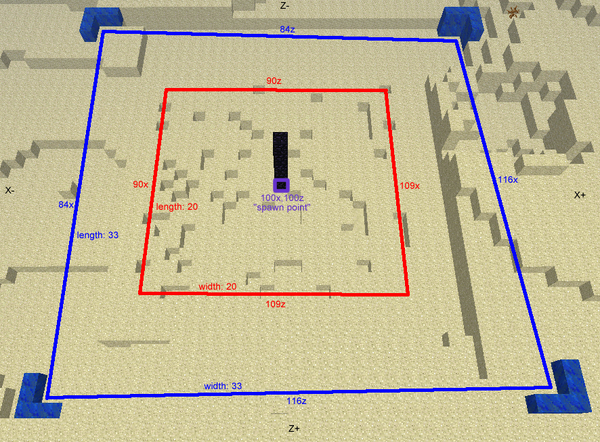 The spawn point was forced to 100x,100z and the player data was cleared. The purple square outlines the column at 100x,100z, which holds an obsidian tower.

To determine the spawn area, a flat, open area large enough for the (presumed) 20x20 spawn area was created. The player (an op) repeatedly respawned and immediately dug a hole if one was not already present. The red square, above, is drawn from the midpoints of the outermost holes in each direction.

To determine the protection area, the player (a non-op) attempted to place blocks until successful while moving away from the spawn, and then traced around the edges of the protected area until all four corners were found. The lapis corners marked above were the extent of the minimum placeable area by the player. The blue square, above, is drawn from the midpoints of the outermost protected blocks in each direction.

There is a 25x25 chunk area around the world's "spawn point" that is constantly loaded, even when the player is not in range. This can be verified by moving a player far away from the world's spawn point and deleting the original spawn chunks in MCEdit and then reloading the world.

That being said, redstone and hopper clocks only work within a 17x17 chunk area of the world's "spawn point", and entities will only stay loaded within a 13x13 chunk area.

Clocks will continue to run even when the player is not in the area, making this a useful tool for map makers who need to have constantly running clocks for the world.

The loaded chunks are decided by the natural spawn point in the world, and may be changed or edited by map makers using the "Move Spawn Point" feature in MCEdit, or the new /setworldspawn command in the 1.7 snapshots from 13w43a on.