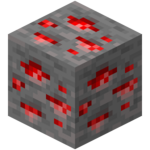 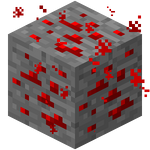 This article is about the ore. For the item, see Redstone. For other topics related to redstone, see Redstone (disambiguation).

The redstone ore block itself (rather than its redstone drops) can be obtained by mining it with an iron or diamond pickaxe with the Silk Touch enchantment.

Redstone ore veins form at the bottom 16 layers of the map. Below layer 14, it can be found in 1.025% of stone. There are an average of about 24.8 redstone ores per chunk.

Redstone ore forms in veins made up of 4 to 8 blocks. However, multiple veins together or non-stone surrounding the vein can change those numbers.

Redstone ore drops 4 to 5 redstone and 1-5 experience when mined with an iron pickaxe or better. Mining with a Fortune enchanted pickaxe will increase yields.

Redstone ore will produce light (strength 9) and red particles when clicked, updated, or contacted by any mob (including the player, if not sneaking). This effect will continue until the redstone ore block receives a block tick (averaging 68.27 seconds). This effect does not actually produce redstone power, but the block changes can be detected with a block update detector allowing redstone ore to act like a pressure plate for mobs, but capable of detecting contact with its sides and bottom surfaces as well.

If a lit redstone ore block receives external light greater than its natural level, it will emit the light level that it absorbed until the block deactivates or is broken or moved by a piston. For example, a torch is placed 2 blocks away from the block illuminates it with a light level of 11. If the torch is broken, the block will continue to emit a light level of 11. If a lit redstone ore block is exposed to sky light being generated by a magma block, it will continue to emit that level of sky light even if later covered.

Issues relating to “Redstone Ore” are maintained on the issue tracker. Report issues there.