Επεξεργασία
watch 01:36
We're Getting Mutants in the MCU - The Loop
Do you like this video?
Play Sound
v0.6.0 alpha
Αρχείο:Minecraft Pocket Edition 0.6.0 Submitted.png 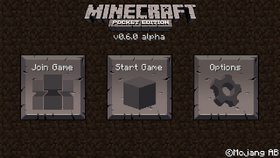 18 issues fixed
From released versions before 0.6.0