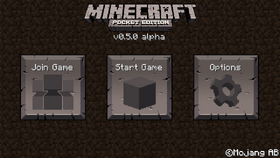 v0.5.0 alpha was a major update to Minecraft: Pocket Edition that was released on Android and iOS on November 15, 2012 and on an unknown date on Fire.[1] It added notable features, such as melons, paintings, glowstone, the Nether reactor as well as other changes and fixes.

39 issues fixed
From released versions before 0.5.0

v0.5.0j alpha was released on an unknown release date.[2] This was the last J-version of Pocket Edition.