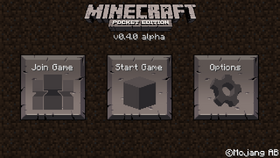 v0.4.0 alpha was a major update to Minecraft: Pocket Edition that was released on September 6 and 13, 2012. It added notable features such as beds, trapdoors, creepers, new food, and farming items, as well as other changes and fixes.[1] This update was also the first public release for Fire.

A trailer for the update was released on September 6, 2012.