Επεξεργασία
watch 01:36
We're Getting Mutants in the MCU - The Loop
Do you like this video?
Play Sound
v0.3.2 alpha 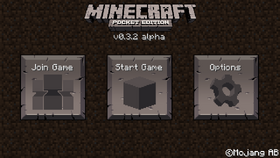 v0.3.2 alpha was a minor update to Minecraft: Pocket Edition that was released on July 16, 2012. It added notable features such as furnaces, gold, iron, and diamond materials, as well as made other changes and fixes.[1]

v0.3.1 alpha does not seem to exist; the version skipped from v0.3.0 straight to v0.3.2. The second reupload of v0.3.0 may have been retro-conned as v0.3.1, due to it adding features, rather than fixing crashes like most other reuploads.[Verify]