Επεξεργασία
watch 01:36
We're Getting Mutants in the MCU - The Loop
Do you like this video?
Play Sound
v0.2.1 alpha 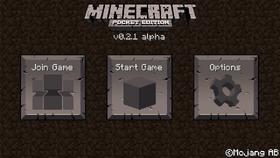 v0.2.1 alpha was a minor update to Minecraft: Pocket Edition that was released on March 14, 2012 that added new control options, as well as other changes and fixes.[1]

Any other changes between the two versions are not currently known.

A free J-version demo of v0.2.1 alpha was released on Google Play on an unknown release date. The internal version is the same as the j version.