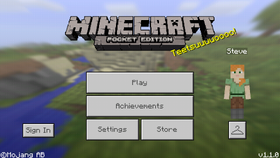 1.1.0, the first release of the Discovery Update, is a major update to Minecraft: Pocket Edition that was released on June 1, 2017. It added many new features primarily focused on exploration (similar to Java Edition 1.11), such as woodland mansions, adventure mode and explorer maps, and some features revolving around the color palette of the game (similar to Java Edition 1.12) such as concrete and glazed terracotta. Other new features included new mobs, such as llama and vexes, the Marketplace, and a partially-implemented off-hand slot.

The update was also the last major update to be released under the name Pocket Edition – afterwards, beginning with Bedrock Edition 1.2.0 (Better Together Update), the name was revised to Minecraft (with no subtitle) due to the cross-compatibility gameplay between other devices introduced in that update.