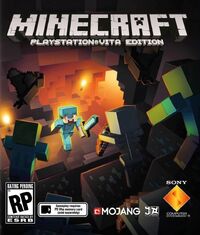 Minecraft: PS Vita Edition is the PlayStation Vita version of Minecraft in development by 4J Studios for and alongside Mojang.[2] A teaser was hinted by 4J Studios on Twitter,[3] and a screenshot published a month later.[4] In a response to 4J, Jeb also informed that it is based on the PlayStation 3 Edition.[5]

The PS3 Edition also has some level of connectivity with the PS Vita version; the game at the store incorporates Cross-Buy, and saved worlds are transferable between the consoles.[6]

PlayStation Vita Edition Also uses AD-HOC for "On The Go" multiplayer and also online multiplayer, but instead of 8 players in one game it supports up to 4 players, because it would have caused framerate issues in multiplayer.